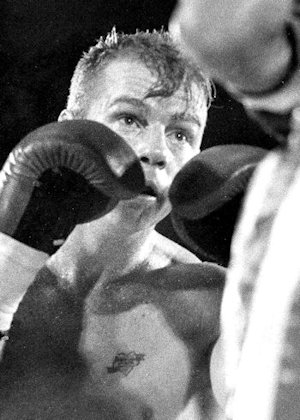 Mark began boxing at the Toronto Newsboys Boxing Club, but it wasn’t until his incarceration in Collins Bay Institution that he became serious about the sport. Upon release, he joined the Kingston Youth Boxing Club operated by Colin and Ken MacPhail.

From there, he went on to an impressive amateur career in which he won 184 bouts while losing only 26. As a member of the Canadian National Team from 1988 to 1992, Mark competed in many international and Canadian Championship tournaments winning the Canadian Welterweight championship four times.

Mark represented Canada in the 1992 Olympic Games in Barcelona, Spain as a definite underdog. He won the silver medal when he lost the Light Welterweight final to a Cuban boxer after four straight preliminary victories. His silver medal is one of only 17 Olympic medals Canada has won in boxing. On his return to Kingston, he was given a key to the city. He was named Canadian Boxer of the Year for 1992 and recognized as the Kiwanis Club of Kingston’s Amateur Athlete of the Year.

Mark won his first professional bout at Kingston’s Memorial Centre in November 1992. He won the Canadian Welterweight title before retiring in 1994 with a 4-1 professional record.