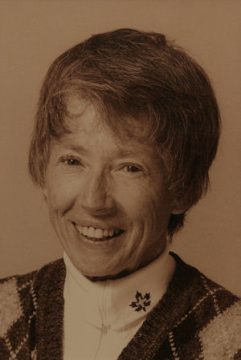 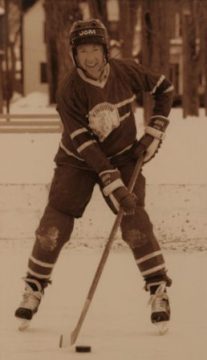 The “Cartwright era” in Kingston women’s golf began in 1960 when Cookie won her first of 24 club championships at the Cataraqui Golf and Country Club.

She won nine Kingston District championships between 1964-1984 and on numerous occasions competed for the district team at the provincial level.

Cookie also made a significant contribution to women’s hockey. She was responsible for the reinstatement of women’s university hockey in 1960. She chaired the steering committee that formed the Ontario Women’s Hockey Association and drafted its constitution. This organization became the cornerstone for the explosive growth of women’s hockey since 1980.

As a player, Cookie played at Queen’s University and then spent three seasons playing Senior A women’s hockey. Twice she was selected Most Valuable Player at North American championship tournaments.

In 1969 she co-founded the Kingston Red Barons, which became a powerhouse in elite women’s hockey in the 1970’s.