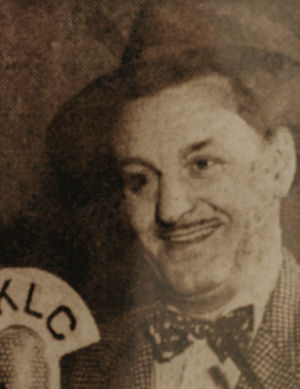 Sports Director at CKLC Radio from 1953-1960, Johnnie was the voice of the Kingston Goodyears, Kingston CKLC’s, Queen’s Golden Gaels, Kingston Frontenacs of the Eastern Professional Hockey League, and the Kingston Speedway.

He covered the first Russian hockey team to tour Canada when they played in Kingston in 1957.

After serving in the Canadian Armed Forces during the Second World War, Johnnie started his broadcasting career with the BBC in Britain in 1947. He spent six years with the BBC and in 1951, called the first hockey telecast for the network. He covered European Boxing Championships and motorcycle racing before coming to Kingston in 1953.

In addition to his broadcasting career at CKLC, Johnnie was active in the Kingston sports community. He was President of Kingstons International Hockey Hall of Fame and the Kingston Aces Senior A hockey team.