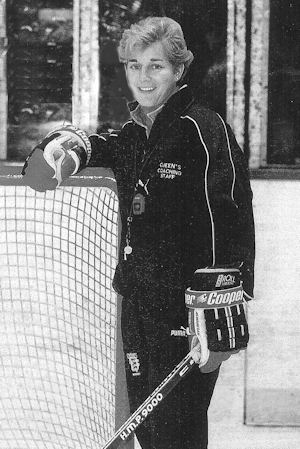 A gifted softball, lacrosse and hockey player in Peterborough, Ontario, Diana came to Kingston in 1980.

Following a four-year varsity hockey career at Queen’s she became the team’s coach in 1987, a position she held for fourteen years.

In 1991, she was named the Ontario University Athletic Association’s Coach of the Year.
Diana was hired as Athletic Director of St.; Lawrence College in 1986. She also coached the women’s soccer and basketball teams while fulfilling her administrative duties at the school.

Her soccer teams won four straight East Division titles from 1986 to 1989 as well as capturing the Ontario Colleges Athletic Association’s provincial title in 1986. That same year her women’s basketball team was undefeated in the regular season while winning the OCAA provincial title.

Diana is the only coach in the history of St. Lawrence College Kingston to receive the Canadian College Athletic Association’s Coaching Excellence Award.