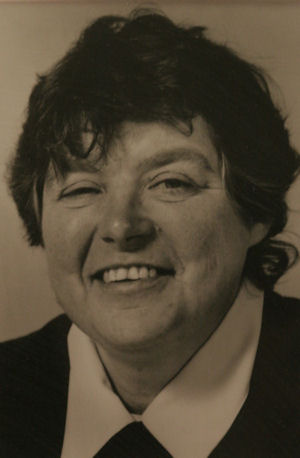 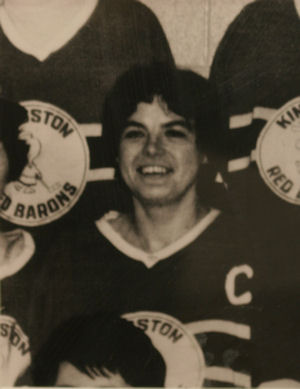 Twit was co-founder of the Kingston Red Barons, serving as captain when they were the best women’s hockey team in Canada in the mid 1970s. From 1973 to 1976, she was the most valuable player at several Senior A tournaments, then the principal form of competiton in Women’s hockey.

A winger, Annabelle learned to play hockey on her father’s mill pond, on Cold Creek near Stockdale, ON. She played her first organized hockey at Queen’s University and she commuted to Picton to play in the Eastern Ontario League. An incredibly strong skater, Annabelle was tenacious in the corners or in front of the net, with a heavy, accurate shot. She terrorized goalies, scoring up to ten goals per game.

In 1969, Annabelle and other commuting players formed the Red Barons. Through the mid 1980s, Twit was both the team’s outstanding player and its spiritual leader. In 1973-1974 the Ontario Womens Hockey Association was formed. The Red Barons won many tournaments, including the North American championships at Wallaceburg in 1975 and 1976, and the Ontario championship in 1975.

Annabelle was coach of the Queen’s women’s hockey team from 1973-1978, during which time it won three championships.

She is a member of the Queen’s Coaches Hall of Fame.