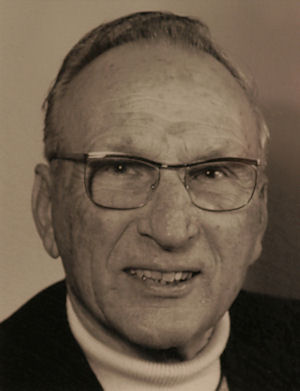 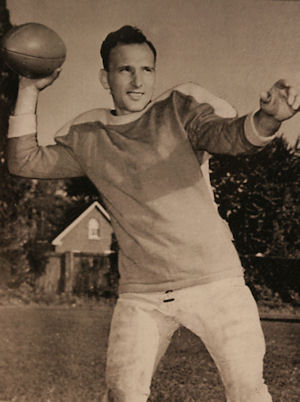 A semi-professional football player with the Hamilton Tigers and Wildcats in the early 1940s, Al was known as a triple threat for his kicking, passing and running ability.

He was a national all-star in 1941 and 1942 before enlisting in the Canadian Navy.

In 1946 Al came to Queen’s University, where he played on the varsity football team for four years. He was an intercollegiate All-star twice, team captain for two years and he won the Jenkins trophy in 1950 as Queen’s outstanding athlete.

Al was accomplished in basketball, baseball, softball, track and field, swimming and lifesaving.

After graduating, Al joined Queen’s faculty in the School of Physical Education, where his duties included coaching football, basketball, golf and curling. In 1963 he began a 20-year career as athletics director, during which time he also served as president of the OUAA and a member of the CIAU board of directors.

In his time at Queen’s, the athletic program grew from 16 to 42 varsity teams. A life member of the Kingston Board of Approved Basketball Officials, Al convened the City Basketball League for 12 years.

An avid golfer into his 80’s, Al won the Glen Lawrence Club seniors championship 11 times and he remained a keen bowler and curler.